Vickie Jones looks over the shoulder of her grandson, Quincy Taylor, 10, as he works on his match homework on the computer at the Michelle Obama Library in North Long Beach on Thursday, November 9, 2017. Jones, who can’t afford internet, spends each day after school with her grandsons as they do their homework on the computers at the library. (Photo by Scott Varley, Press-Telegram/SCNG)

Who is working to put computers into the hands of low-income students?

In ASK LBMC, a part of the Long Beach Media Collaborative’s series Strengthening the Signal, our reporters answer your questions about the digital divide in Long Beach. To submit your question or vote on what the next question we tackle will be, click here.

“We’re here every day after my grandson gets out of school,” Jones said.

They can be found at one of several sprawling banks of computers. Jones said she has a “small laptop” at home, but can’t afford a broadband subscription. So she heads to the library so Quincy, a fourth-grader at Jane Addams Elementary School, can do his online homework. She goes online, too.

“We use it for everything,” Jones said. “I use it for my craft things. He uses it to learn.” 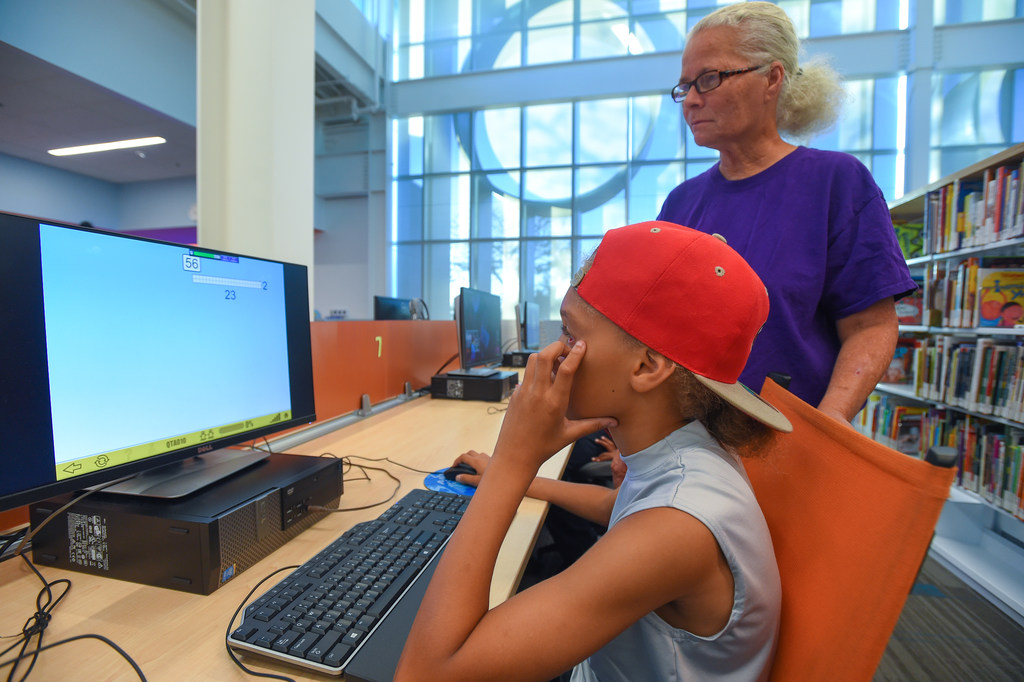 Vickie Jones looks over the shoulder of her grandson, Quincy Taylor, 10, as he works on his match homework on the computer at the Michelle Obama Library in North Long Beach on Thursday, November 9, 2017. Jones, who can’t afford internet, spends each day after school with her grandsons as they do their homework on the computers at the library. (Photo by Scott Varley, Press-Telegram/SCNG)

“He’s supposed to be working on homework and after that I told him he can get on his games,” she said.

Michelle Obama and other city-run libraries play a role in putting computers in the hands of schoolchildren in an era when much homework is internet-based.

The 12-branch system is part of the answer to the top-ranked question readers have raised so far in response to the Long Beach Media Collaborative’s ongoing series on the digital divide.

That question is this: What can we do to get computers into the hands of low-income Long Beach students so that they have the computer literacy skills they need? 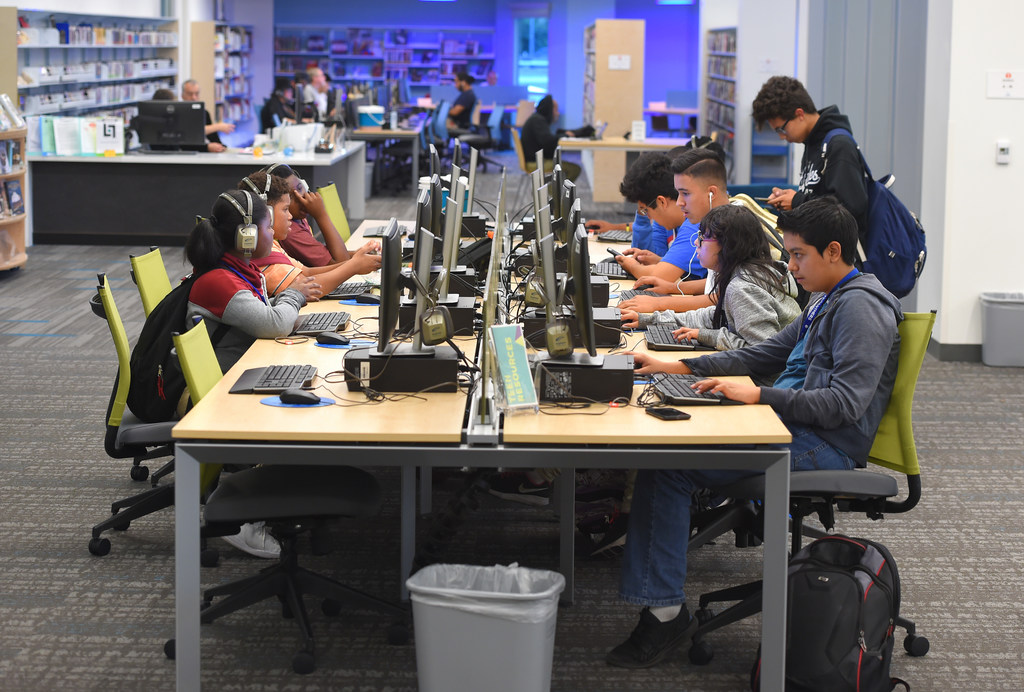 Students take advantage of the computers that are available at the Michelle Obama Library in North Long Beach on Thursday, November 9, 2017. (Photo by Scott Varley, Press-Telegram/SCNG)

It’s an important question. One that experts and officials have been wrestling with throughout California and the nation. And one that eludes easy answers.

Because the Long Beach Unified School District is the primary entity that educates the city’s low-income students, we put the question to Chris Eftychiou, a district spokesman.

“We’re seeing multiple solutions that continue to evolve,” Eftychiou said. “This work is more complex than issuing devices. Of course, the ideal solution would be to deal with the issue of poverty and reduce the impact of that root cause, which can affect learning in so many ways.”

Until poverty is significantly reduced, though, it will be important for schools to take the lead in making sure students have access to computers and the internet, experts say.

Ideally, said Sunne Wright McPeak, chief executive officer and president of the California Emerging Technology Fund, an advocacy group with offices in Los Angeles and San Francisco, the district serving a particular community should place a school-purchased device, with a keyboard, in the hands of each low-income student. 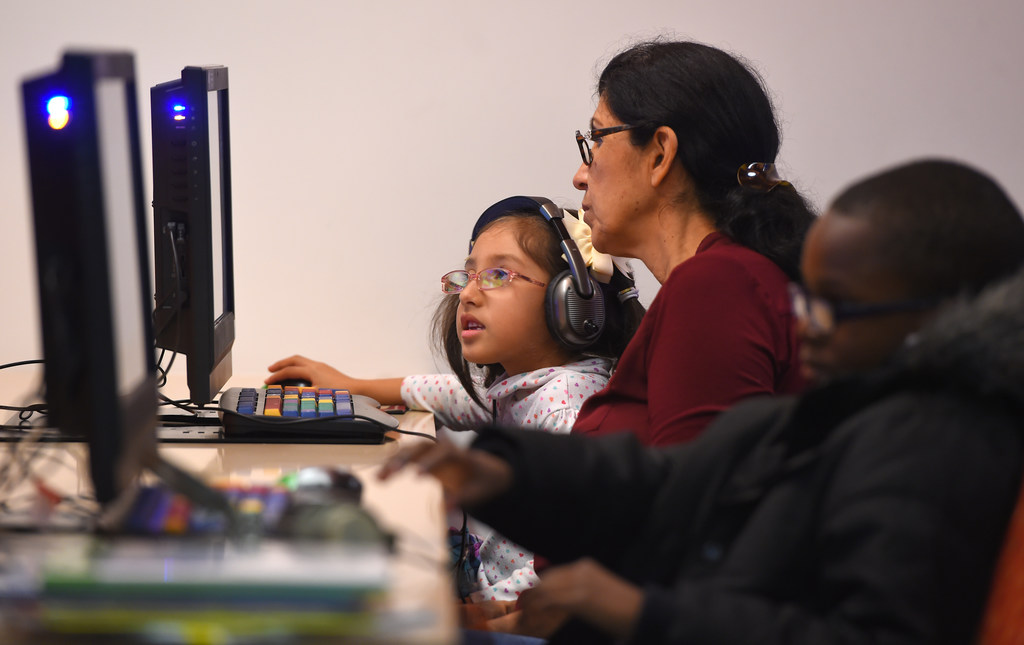 Long Beach has made strides in that direction.

Vanitha Chandrasekhar, education technology coordinator for Long Beach Unified, said the district began updating school labs around 2010 so kids could practice on computers and develop keyboard skills. Since then, Wi-Fi has been piped into classrooms and the internet has been weaved into virtually every facet of educational life.

“Because about 70 percent of students in our school district come from low-income households, and we have systematically integrated technology into our curriculum, we are providing opportunities for students from all walks of life to develop computer literacy,” Eftychiou said. 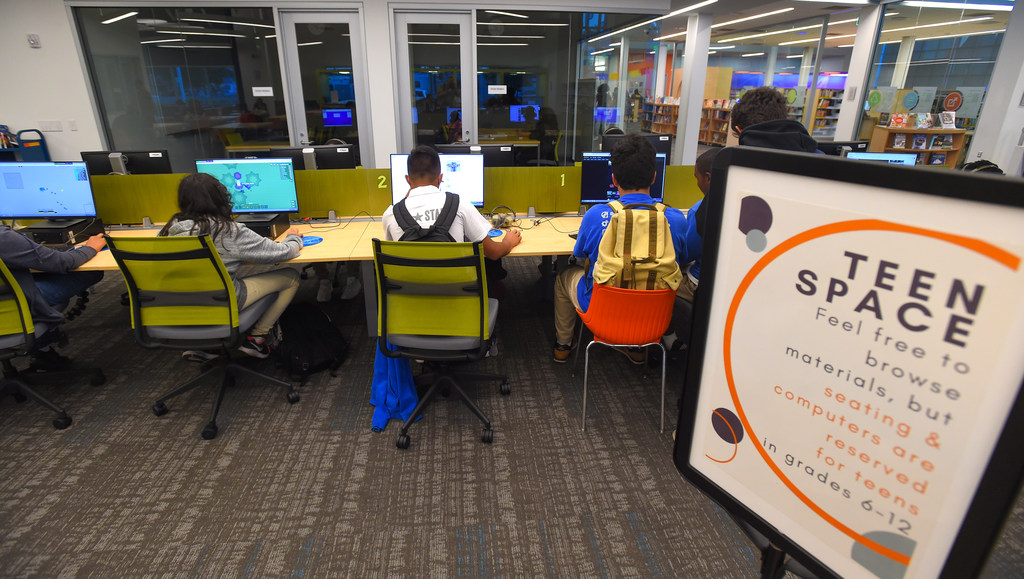 In the teen area at the Michelle Obama Library, some students do homework while others play games or watch videos on the computer in North Long Beach on Thursday, November 9, 2017. (Photo by Scott Varley, Press-Telegram/SCNG)

But the schools can’t do it all. So it helps to have city libraries involved, too.

Most libraries have family learning centers, where kids can get help with homework, Gerot added.

According to a list provided by the city, there are more than 260 computers at the libraries.

Community groups put computers in the hands of low-income children, too.

Centro C.H.A. has a technology center, for example, that has a dozen computers. The YMCA of Greater Long Beach has dozens more available for public use. Other groups such as human-I-T take donated personal computers and laptops, refurbish them and give them to low-income households for free.

In short, the answer is it will take a team effort.