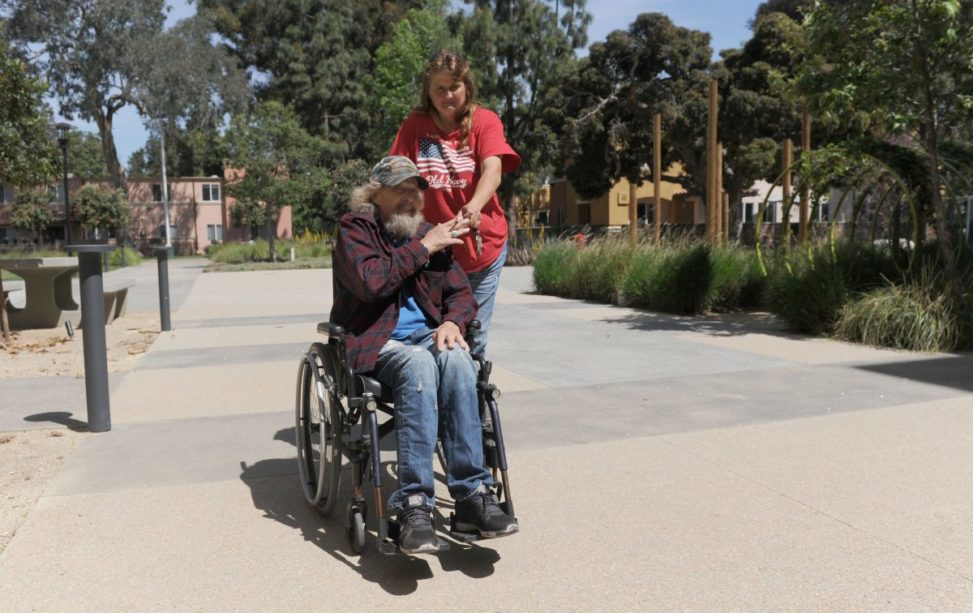 Hank and Kathy Elands, who were once homeless, outside their apartment complex at Century Villages at Cabrillo. Photo by Stephen Carr.

‘Just house them:’ This Long Beach campus is getting people off the streets

As they look out of their top-floor apartment toward the Long Beach skyline and the ports of Long Beach and Los Angeles, Hank and Kathy Elands can’t believe their good fortune.

Just 14 months ago, their view was of a swath of broken pavement as they slept huddled on the sidewalk on Third Street in the East Village of Long Beach.

For 3½ years the married couple had been part of a street community near Christian Outreach in Action, a nonprofit that regularly feeds the homeless.

Their new place in the Century Villages of Cabrillo is small, consisting of a living room that holds a small sofa and two chairs, a kitchenette, a bathroom and a bedroom big enough for a bed and chest of drawers.

For the Elandses, it could just as well be a suite at the Waldorf Astoria.

The Villages in West Long Beach is unique: It’s a 27-acre campus on former Navy property that provides supportive housing to about 1,500 people, including veterans and families with young children. It is a lifeline for homeless who might not otherwise find shelter in Long Beach.

The facility is an example of a new model for thinking about how to solve homelessness: Just house them.

Hank and Kathy Elands in the the living room of their one-bedroom apartment at the Villages at Cabrillo, an affordable housing development on the Westside of Long Beach. Photo by Stephen Carr.

For more than 20 years, studies have shown that the cost of doing nothing with the homeless is actually higher—much higher in some reports—than providing housing. After calculating the costs of incarcerations, hospital stays, emergency room and medical costs and increased use of public services by the homeless, street life costs a lot of money.

The last decade has seen a paradigm shift in the way homelessness is handled. Before, you treated a person’s underlying issues first; the new perspective is that you should house them first, then worry about other problems.

The concept of “housing first” is the idea of New York psychologist Sam Tsemberis, who launched a program in New York in the 1990s in which 242 chronically homeless people were offered housing without any preconditions, such as sobriety or enrollment in certain programs.

To Tsemberis, the model is the only logical conclusion once one accepts that housing is not a privilege or extravagance but something more elemental.

Once a society makes that fundamental decision, it will find solutions, he argues.

“It’s not rocket science. If you have the political will and the value set, you can end homelessness,” Tsemberis said. “It begins with the premise that housing is a human right.”

Although the original housing first program was designed for chronically homeless with mental health and substance abuse problems, “the worst of the worst,” in Tsemberis’ words, it has since been expanded to larger populations.

Since then, housing first has revolutionized homeless care. Initiatives and policies have been copied by agencies nationwide and even adopted in countries such as Canada, Ireland, New Zealand and Finland.

Once housing is established, case managers and providers can begin offering flexible services rather than requiring them.

Tsemberis said the old model of requiring homeless to “earn” housing was unreasonable, because the homeless were in survival mode.

Letting their guard down

“How can you manage all this if you don’t have a place to live?” asked Tsemberis, a clinical psychologist and founder and executive director of Pathways to Housing. “On the streets it’s all about survival. You have a better chance to get a handle on your drinking if you have a safe, stable home.”

Ayana Cobb, a veteran who lives at the Villages, said when she lived in her car, “my mind was always racing.” It was only when she felt safe and stable, she said, that she could begin to think and proceed in an orderly way.

“I’m sure you can understand that with physical health, mental health, any kind of health, spiritual health, having a roof over your head makes a huge difference,” said Heather Fibley-McCabe, a project-based manager with Mental Health America, Los Angeles.

In addition to cost savings, several studies have found high retention rates in housing among the formerly chronically homeless ranging between 80 and 88%.

“For the first time we realized people on the streets were doing all they can to survive,” she said. “You had to put them in a place that was safe before they let their guard down.”

Ayana Cobb, who once slept in her car, walks into the entrance of her apartment complex at Century Villages at Cabrillo. Photo by Stephen Carr.

How to do it

Paying for it—and coordinating the housing—is another matter.

In Long Beach, housing for the homeless flows primarily through two departments: Health and Human Services and Development Services.

The Multi-Service Center and its Continuum of Care system under the Department of Health and Human Services is the primary portal. The center has more than 13,000 visits each year and Homeless Services, which operates the facility, administers about $11.5 million per year in federal, local and private funding for services, working with a wide array of partners, including 12 funded agencies.

Nonprofits such as Mental Health America, Los Angeles, PATH, U.S. Vets and Century Villages at Cabrillo, which alone has more than 30 affiliates including 12 on its site, are also partners.

“These are people who went through our homeless system of care,” said Teresa Chandler, Human Services Bureau manager.

Most of the city’s funding for the homeless comes from the U.S Department of Housing and Urban Development. In recent years, HUD has pivoted hard into the “housing first” camp, issuing memos describing its support. HUD provides about $9 million annually to the city in Section 8 vouchers to subsidize rents for homeless as well as low-income residents.

But the problem is great—the city’s most recent homeless count this year found 1,894 people living on the street—and vouchers often don’t cover the cost of housing.

Despite having a Section 8 voucher, residents Marcos and April Pacheco ran into sticker shock.

“Long Beach ain’t the ’hood it used to be,” Marcos Pacheco said, referring to the gentrification and rise in prices since his childhood.

The city will need roughly $25 million in ongoing funding and $220 million in capital funding to help house the homeless, according to a 2018 report from the Everyone Home Long Beach initiative. That includes 200 emergency shelter beds by the end of 2020, 200 new permanent supportive housing units by 2023 and 2,000 very low or low income units by 2023.

Jayden Pacheco, 8, talks with his parents Marcos Pacheco, 40, and April Pacheco, 37, inside their apartment at the Villages at Cabrillo. Photo by Stephen Carr.

It Takes a Village

Along a pedestrian walkway, residents enjoy a sunny day and the profusion of flowers and trees in the central campus. The Villages is home to a wide array of service providers ranging from American Indian Changing Spirits to U.S. Vets. Shelter ranges from transitional and permanent housing to emergency shelter. There are children and teen services and clinics, recreational facilities, social halls and meeting spaces. And there seems to be an unusually high percentage of smiling faces.

In its way, the Villages is a poster child for solutions to homelessness. California Gov. Gavin Newsom, who has made affordable housing and curtailing homelessness central themes to his campaign, even visited the Villages in February.

Long Beach was lucky; not every city inherits 27-acre parcels of land. Over the years, the Villages has been able to grow, serve and house people across the homeless spectrum.

There are people like the Pachecos, who just need a lift to get back on their feet. Marcos Pacheco had a successful small business installing garage doors before a rat-a-tat series of setbacks sent him reeling.

In the meantime, their children are finding a sense of home and community.

“Overall it’s just a great place,” she said of the new family home. “It has really helped me grow as a person.”

Hank Elands, 70, who has recovered from substance abuse and several heart attacks, has rebounded from his time on the streets and is busy banking as much money as he can to make sure his wife has a safety net should his health fail, even though she would have the option to stay at the Villages as long as needed.

Elands said finding shelter wasn’t hard once. In retrospect, he’s not entirely sure why he lacked the wherewithal to seek out help, but the street will do that.

“I just didn’t care,” he said of his attitude while homeless.

“I just didn’t know how to go about it,” he said of finding help.

Finding permanent housing didn’t come automatically. The couple lived for six months at the Colonial Motel before they were placed in Cabrillo.

“But at least it was better than being on the streets,” his wife, Kathy Elands, said.

Ayana Cobb had a job with the same employer for nine years as a fraud investigator before being laid off.

“I never thought I’d be homeless,” said Cobb. “After that, things began to spiral really quickly.”

Cobb was soon living in her car and looking for safe places to park. “You hear there are all these resources for the homeless, but I didn’t know where to start,” she said.

It was almost by accident that Cobb found her way to her new home. She was receiving therapy at Veterans Affairs in Long Beach when, during a chance conversation, she learned there was an office in the hospital that could help her with housing.

Cobb was able to find admittance to a women’s shelter while slogging through the paperwork and bureaucracy and misinformation that threatened to derail the process.