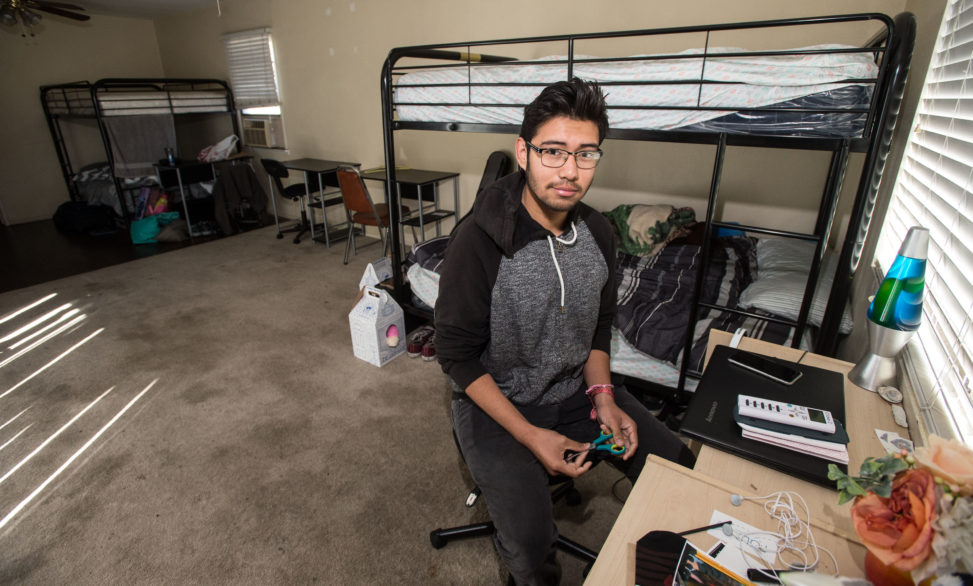 CSULB student Jonathan Perez inside the room inside a East Long Beach home that he shares with up to four other people. Photo by Stephen Carr

The only consistent alone time Johnathan Perez gets to enjoy is in the shower. The Cal State Long Beach sophomore bunks with three others in a house often crammed with college students.

“I’m not proud of living here,” said Perez, 18. “Like, I wouldn’t entertain company but I can walk to school and work.”

He and other students are trying to get through school in one of the most expensive places in the country, where apartments average almost $1,500 a month and single rooms can run up to $1,200.

For graduating high school students and junior college transfers, student life, academia, prestige and perhaps even the red Solo-cup scene aren’t the only factors that go into picking out a college campus to attend. The cost of living either on or off campus is also a legitimate concern.

“I don’t doubt that housing costs is a growing barrier to students picking us,” said Jane Close Conoley, president of CSULB. “I think it’s really a threat to our existence because our whole point is to offer students of all income levels a chance for higher education and if it’s impossible to live here that’s going to cut out students from more modest means.”

A 2018 study found 42% of CSU students experienced food insecurity—meaning they lack access to enough healthy food—compared to roughly 13% of the country as a whole. The study also found nearly 11% of students reported experiencing homelessness at least once in the prior 12 months.

Four months ago, the city of Long Beach brought 250 volunteers together to count the homeless population in the city. Data revealed that of the roughly 1,900 homeless on the streets, 4% identified as students.

The problem has gained wider attention, particularly as tuition rises and housing in this region becomes more scarce and expensive. A study out this week by Harvard University found the Los Angeles-Long Beach-Anaheim metro area is the most cost-burdened housing market in the nation, with 46% of households spending a third to half of their income on housing.

As rental rates soar to near unreachable heights and space in on campus housing becomes more impacted with a growing number of applicants every year, university officials are working on solutions to accommodate more students.

“It really puts our students at risk not to have campus housing that’s safe and secure,” Conoley said.

In the next 18 months, the university intends to build new dormitories for studentson Earl Warren Drive and Atherton Street that will add 476 new beds on campus, the university’s first housing build in 30 years. In addition to this, the university has been working with developers in Downtown Long Beach to build affordable off-campus housing.

The university is also looking at other alternatives such as pairing students with empty-nesters or adults who would be willing to rent rooms to students a lower cost. They are also encouraging community members to donate houses.

“We are continually looking throughout the environment for other partnership opportunities,” Conoley said.

In conjunction with adding more housing, the university has also attempted to address students who have been displaced or forced into homelessness by the cost of living.

The Basic Needs Program at the university was created in March 2015 in support of the CSU chancellor’s Basic Needs Initiative which was created to support students’ well-being.

“We have money set aside for students who have exhausted all financial aid, grants and loans which is a fantastic resource,” said Kenneth Kelly, director of Basic Needs.

Kelly also works with students who have already lost their homes by helping to place them in temporary housing in specially reserved, vacant dorms on campus.

Dorming at CSULB can cost more than $12,600 per academic year, including a seven-day meal plan.

Federico Yniguez, 20, a junior, pays substantially more than Perez, who shares a room in a house; the cost of Perez’ housing, without meals, is $5,400 per year.

But aside from a few complaints, Yniguez is enjoying the college experience.

“It’s a rite of passage,” Yniguez said of living on campus. “I made a lot of friends just from dorming.”

And, though Perez’s quarters are cramped, he is getting by.

“I kind of envy those who live on campus,” Perez said. “But my rent is a lot cheaper.”