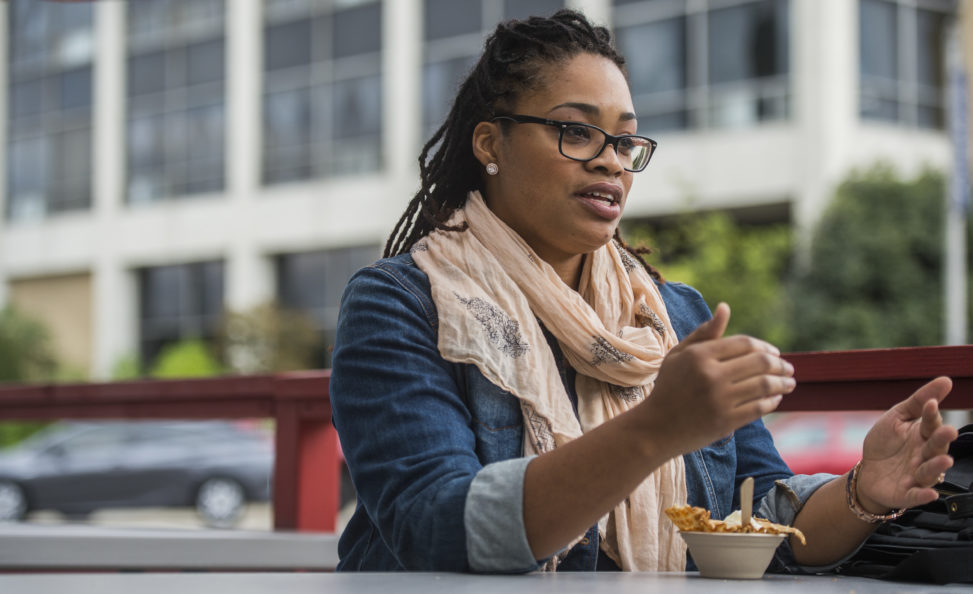 North Long Beach resident Stelena Anderson talks about her struggles of searching for a job without Internet access at home. (Photograph by Thomas Cordova, Press-Telegram)

The Challenges Of Job Hunting Without The Internet

Up until three months ago, Stelena Anderson and her family lived without Internet at home, relying on family members, libraries, an unemployment center and places such as McDonald’s and Starbucks for Internet access.

Anderson could no longer afford Internet at home after her former employer mailed her a termination letter in 2014. She was on maternity leave with her second child at the time.

“I felt like it was hard to give up the Internet because, after that, there was no access to look for work,” said the Long Beach mother of three, whose family depended on her husband’s income to make ends meet after her former employer eliminated her position in 2014.

If Anderson went to McDonald’s or Starbucks to access the Internet, she needed to make sure her laptop was fully charged because those places had few outlets for plugging in. If she headed to the computer stations at the Career Transition Center on Atlantic Avenue, she had to schedule a babysitter because the office doesn’t allow children.

Most of the time, Anderson went to the Michelle Obama Neighborhood Library, bringing her children along while she searched online for jobs and submitted resumes and applications.

#AskLBMC: What is important to know when purchasing a computer…

#AskLBMC: What is important to know when purchasing a computer, especially on a budget?

She once resorted to using her smartphone to submit a job application and résumé to a local fashion manufacturing company, which proved problematic because she wasn’t sure if she was seeing the company’s whole website on her phone. When she uploaded and sent her résumé, the format looked distorted. “I don’t think they saw my whole résumé,” she said. She didn’t hear back from the company.

“This is the only time I’ve ever been off work, and it’s been the hardest,” Anderson said.

For many people like Anderson, Internet access is a vital component in the search for jobs, and prospects shrink for those without it.

In 2015, the Pew Research Center surveyed 2,001 U.S. adults ages 18 and older about their digital job search habits and found that the Internet is more important than ever in the search for work.

North Long Beach resident Maria Hernandez, 25, is looking for full-time work to support herself and her four-year-old daughter.

Hernandez, who is working part-time while taking classes at Long Beach City College, divides her time between Starbucks and the Michelle Obama Neighborhood Library because she can’t afford to have Internet at home. She also doesn’t have her own computer, so sometimes she borrows a friend’s laptop.

If she heads to the library, Hernandez has to search and apply for jobs within the library’s time limits. Sometimes she can reserve computer time for two hours, sometimes less.

“A lot of jobs are saying, ‘Apply online, apply online,’” Hernandez, who has had to apply for jobs on her smartphone, said. “I need the Internet. Maybe there’s one job where they’ll tell me to go and fill out [a paper] application, but most of them tell me to apply online.”

While Pacific Gateway, a public agency that provides workforce development services in the Greater Long Beach area, does not track whether clients have Internet at home, officials there see active, regular use of its computer stations, according to Erick Serrato, the agency’s deputy director.

Many Pacific Gateway clients are those entering the workforce for the first time in more than 10 years and are not familiar with the idea of online applications or how online job search works, Serrato said. “They find it difficult, so we try to help them understand the [job] environment and access services to the Internet,” he said.

The Internet’s role in searching for jobs is a critical one as more and more businesses are moving hiring practices online and using a variety of technology tools, he said. For example, organizations such as the City of Long Beach are moving towards the use of video technology in which applicants record themselves answering questions and then send the video in for review.

Businesses are suggesting that applicants apply first online before showing up to job fairs in person, Serrato said. “It has changed the way folks search for jobs and the way they interview,” he said. “It’s frustrating for folks because they’re used to selling themselves in person, but their identity really begins at a digital level, before they even meet someone in person.”

At the Career Development Center at California State University, Long Beach, students are encouraged to go on social media and websites such as LinkedIn – a major recruiting tool for employers – for the latest job leads, according to Terri Armstrong, communications coordinator and career advisor at the center.

“Recruiters try to use all the different avenues available to them to find good candidates,” she said. “I think that, with the Internet, a lot of that can be a hidden job market because a lot of people don’t think to look there. A lot of people wouldn’t think to go on Twitter to look for a position in a company they would like to work for. They [companies] may post something that not everyone has access to but, because you’re following them, you may see it first. A lot of employers will post on social media in real time. That’s the hidden [job] market, so to speak. I don’t think a lot of people are savvy to that.”

Having the Internet can also help in formulating a great first impression, Armstrong said.

“You want to do your homework and find out the company’s mission and vision and figure out how you can contribute to that organization, and know what they’re looking for,” Armstrong said. “And you can’t do your homework if you don’t have access to the Internet. You can’t get fully prepared to meet with an employer.”

Anderson agrees. When she didn’t have internet at home for two years, she rushed from place to place for Internet access, prioritizing putting in applications over research.

Three months ago, Anderson was finally able to afford Internet at home for about $50 a month, thanks to her husband’s recent raise. Now she can research prospective employers. She doesn’t have to worry about charging her laptop before she goes out or dragging her kids to the library and asking them to sit still while she types. She doesn’t have to apply for jobs on her smartphone. Last month, she sent out nearly six job applications every week from the convenience of her home. She hasn’t received any responses, but she’s hopeful.