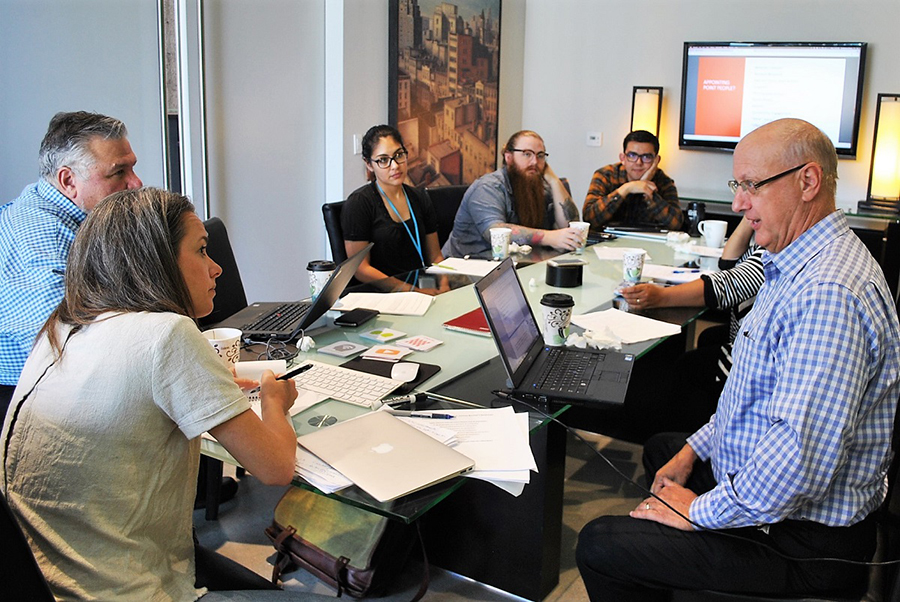 In a major effort to cover issues important to the Long Beach community by leveraging the power of local journalism, four news agencies—the Long Beach Press Telegram, Long Beach Post, Grunion Gazette and Long Beach Business Journal—accepted the challenge to work together for the first time under the umbrella of the newly-formed Long Beach Media Collaborative.

Initiated in August 2016 by Long Beach Community Foundation President and CEO Marcelle Epley, the collaborative’s first series exploring the causes and effects of the digital divide in Long Beach and around the world, called “Strengthening the Signal,” was launched October 20 of this year.

The idea of a media collaborative isn’t new, but it is for Long Beach. To find out whether the LBMC’s participants have so far deemed the project a success, and before the group has gathered to discuss this among themselves, the Post interviewed Press Telegram Senior Editor Thomas Bray, Long Beach Post Director Dennis Dean, Long Beach Business Journal Assistant Editor Samantha Mehlinger and Gazette Newspapers Executive Editor Harry Saltzgaver.

“You’re working with an array of strong personalities, each with their own wealth of experience, and you’d think that could really pose a challenge,” Mehlinger said. “But everyone was quickly willing to come to the table, have many open discussions and spend a lot of time figuring out how to make this new, nebulous idea of a collaborative into a tangible project designed to benefit each outlet, as well as the community.”

Described as a “new and unusual” arrangement by Bray, most were impressed by all participants’ ability to function cohesively as a group, despite being accustomed to the daily race of trying to beat each other to local stories. Most commented that the experience was a positive one, and presented an opportunity to meet and learn from other professionals they never would have normally approached.

“I think it was easier than we expected to create working relationships across newsrooms,” Dean said. “It took a while to figure out what this project would look like, but once we had a topic we were all excited about covering, focusing on the importance of the coverage and consensus building when making decisions about the direction of the collaborative seemed to make everything come together smoothly.”

“The Long Beach media landscape is competitive, but I think journalists all want the same thing—to produce good work—and focusing on that goal made the collaboration successful,” Dean added.

Epley voiced that if the LBMC were to work on any projects in the future, it would be critical to have a point person, and entertained the idea of identifying more resources to make sure the group communicates with that individual, whether they be someone from outside the publications or someone working within. In this case, the project manager was former Press-Telegram reporter Wendy Thomas Russell.

“I think that’s what has really made this successful,” Epley said. “Having a point person that not only people respect and trust, but also knows the business and knows how to keep the project going and has the experience to do that.”

Russell added that selecting the digital divide as the topic for the LBMC’s first project was strategic, alongside its importance to the Long Beach community.

“We wanted a topic that could be covered from a number of angles, but would not create power struggles between or among the news organizations,” she said. “These organizations had never worked together; trust had to be built over time.”

As an award-winning journalist and a member of the Long Beach community, Russell said managing Strengthening the Signal was “incredibly gratifying.”

“Each publisher played a part, devoting newsprint, staff hours or resources to the project,” she said. “We successfully tested a model of collaborative journalism, bringing together four disparate newsrooms — emphasizing community over competition, pooling resources, expertise, platforms and audience reach, as well as building trust between the news organizations.”

Most of the participants agreed that the news agencies collaborating actually bolstered in-depth local journalism; some reporters were able to share valuable resources with each other for the sake of covering the important issue of the divide, a practice practically unheard of among competing publications. Others were able to learn from each other’s differing experiences in the field.

“Getting to know other journalists in town was eye-opening in a few ways,” Mehlinger said. “For me, it was particularly encouraging to see a strong faction of Millennial women in local journalism, including in management positions. It was also a unique opportunity to listen to and become acquainted with more seasoned journalists who have really devoted their lives to this field and to covering Long Beach, in particular.”

Bray commented that collaborating was one way to ensure an important topic was covered as thoroughly as possible, saying “I certainly don’t think this topic would have been covered to this breadth by any of these entities individually.”

“I think journalism in Long Beach has always been particularly strong, but I do think this kind of collaborative model allowed the reporters, who are used to operating under the stresses of the daily digital news cycle, to break down a large issue into smaller parts they could really focus on and drill down into to give this issue the attention it deserves,” Dean said.

One criticism included the length of the series, which ran over a period of seven weeks. Saltzgaver said readers of the Grunion Gazette began to lose interest. Another involved the scheduling of meetings being prioritized equally for all publications, as each adheres to differing programs and practices, as well as the resources provided by the Knight Foundation being allocated more equally depending on each entity’s share of the workload, which varied throughout the series.

Mehlinger suggested that any future LBMC projects be organized on a longer timeline, not only to accommodate differing schedules but also to generate more of a buzz prior to the project’s debut. However both Dean and Epley were in agreement that plenty of people have been talking about the digital divide, while Bray noted that engagement in journalism is certainly an evolving concept.

From a business perspective, whether each publication was able to benefit from reporting on the divide, there were mixed reactions. The Business Journal saw no increased attention to their publication, with Mehlinger commenting, “If the subject matter had been something more relevant to the business community in Long Beach, I think there could have been a positive effect for us.”

“We were less concerned with increasing our own traffic and more focused on driving engagement to the collaborative website, where the full series is housed, increasing awareness of this important issue, and getting people talking about the digital divide,” Dean said. “In that goal we were extremely successful.”

When asked if this collaborative model could be replicated in other cities, Saltzgaver commented positively on the attitude of Long Beach’s news groups.

“It depends on the types and personalities of the media outlets,” Saltzgaver said. “Long Beach is fortunate in having several outlets with a true concern for the community’s well-being.”

Looking past Strengthening the Signal, Epley added that her “definition of success would be a second series that happens between the group.”

“What I’m really happy about is the group has been successful in reporting this issue that’s really engaged the community and is really solutions-based,” said Epley. “The city and the schools and the libraries are talking about what they’re doing already, or what they plan on doing to help the issue.”

The results of the community foundation’s Around the Table citywide discussion will be published likely after the first of the year, where nearly 3,000 locals participated in September to discuss what can be done to collectively improve Long Beach. The number one issue raised was housing and homelessness, Epley said.

“My biggest hope is that this group does not walk away from the tremendous effort that they have just made,” Epley said. “That they find a way to find each other again when a big story comes, that they look to each other to report on it the way that they have because the model is working. But my hope is they engage next year with each other around housing and homelessness.”