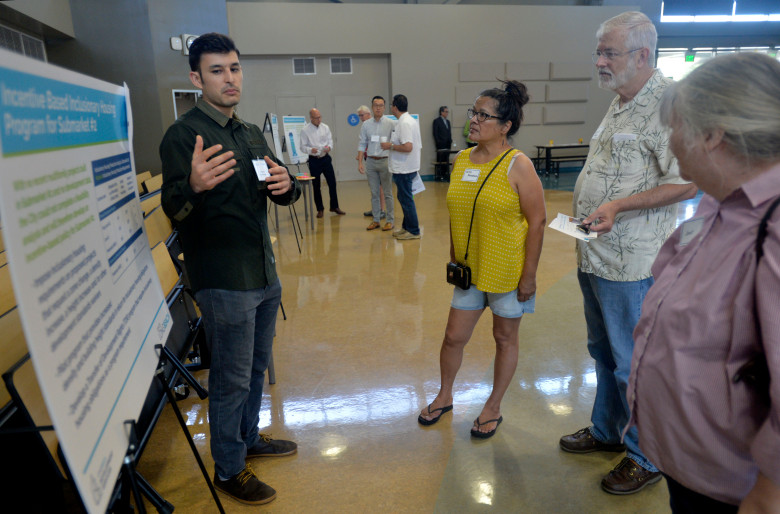 The City Council has already signaled they support the idea in theory, so Long Beach staff must now suss out the details.

This article is part of “The Housing Divide: Making it in Long Beach,” a series of stories from the Long Beach Media Collaborative examining the impacts of the statewide housing crisis on our city.  The collaborative was initiated by the Long Beach Community Foundation and is funded by the Knight Foundation.

Amanda Paiz knows all too well the impact that Long Beach’s lack of affordable housing has on some of its most vulnerable residents.

As a community health educator with The Children’s Clinic, she often meets with families facing the hard choice of enrolling in health insurance or paying their rent.

When faced with that question, her clients always choose the latter.

Paiz is well-educated on Medi-Cal, the state’s health insurance program for low-income people. But more and more families she meets make too much money to qualify — and yet, they still can’t afford insurance.

“We often have middle-class people applying for insurance, and insurance is really, really high, and they can’t afford it, so they opt out,” she said. “They say, ‘Well, half my money goes to rent.’”

Those encounters are what led Paiz to attend a Saturday, June 29, Long Beach workshop on a policy known as inclusionary housing.

The idea — one that’s been adopted by more than 170 jurisdictions in California alone — is to require developers to include some amount of affordable units, often around 15% of the total units, in new projects.

Cities with inclusionary housing policies frequently allow builders to opt-out of that rule by paying into a local affordable housing fund.

“Patients come in without housing, or with housing they can’t afford,” Paiz said. “We try to give resources, but we notice that there’s not enough housing available. Even though there are developments, there’s only a small, small number of affordable units compared to the big population.”

What inclusionary housing could mean in Long Beach

So, in December, Long Beach kicked off the process of developing an inclusionary housing policy. The city is on track to present a proposal to the City Council for approval in September, but officials are seeking community input along the way.

The City Council has already signaled they support the idea in theory, so Long Beach staff must now suss out the details that would create the most effective program for the city.

Should small buildings be exempt? What percentage of units should be built for people with very-low incomes, low incomes and moderate incomes? Would affordable units have to be built on-site, or could a builder find a separate location for them?

Those are just some of the questions Long Beach needs to answer.

Some of the suggestions city staff presented at the Saturday workshop, which were based on the results of a study into the program’s economic feasibility, included:

In the middle are those with low incomes, which is about $83,500 for a family of four. If a developer wanted to provide units to those families, the suggested required share presented Saturday was 12%.

City staff members at Saturday’s workshop emphasized that everything presented was merely a starting point for discussion and that no decisions on the policy’s parameters have been made.

“If you have any thoughts or comments on anything, please let us know,” Long Beach’s Development Services Analyst Andrew Chang told attendees. “We’re open to all ideas.”

Paiz, for her part, was glad to see that Long Beach was considering relief for those with very-low incomes, as well as those middle-class families who often don’t qualify for these types of programs.

“I think it is important to include a percent of moderate- to low-income units, because you’re often stigmatized when you live in these affordable housing units,” she said. “To include people from all income brackets, I think, would hopefully help break down that stigmatization of low-income people.”

But not everyone sees it that way.

What developers think about inclusionary housing

While a mixed-income building may benefit residents in theory, developers say offering similar units at vastly different price points can throw off the finances of a project to the extent that it’s simply no longer worth building.

“We’re coming across that more and more,” he said. “You don’t make money on affordable housing, you just don’t.”

Powers said he has run into opportunities to develop in cities where inclusionary zoning is in place, and did not go ahead with a project because he couldn’t make the numbers work.

However, since Sares-Regis focuses on large developments, Powers believes new projects may still be able to go ahead with a 15% inclusionary zoning requirement in place — if rents rise enough to cover the added costs. He speculated that developers of smaller projects would severely struggle under such a policy.

“There’s a limit to what we’re willing to do,” Powers said. He cautioned that city planners thoroughly consider any new zoning requirements on market rate developments before they are enacted. “I think they need to be careful about what they’re going to ask for,” he said.

Studies of inclusionary housing policies have shown mixed results when it comes to the impacts those programs have on local housing markets.

A 2012 San Jose State University study, for example, found that cities with these types of policies had 7% fewer homes and 20% higher prices between 1990 and 2000.

Along the same lines, a 2016 analysis by the Sacramento firm Capitol Matrix Consulting estimated that a 15% inclusionary zoning requirement applied to all new housing built in California would result in a $67,000 increase to the price of remaining market-rate units.

On the other side, though, a 2016 brief from the National Housing Conference’s Center for Housing Policy that looked at more than 500 jurisdictions with inclusionary housing policies found that they did not drive housing costs up in the vast majority of cases.

How Long Beach will balance those concerns

For Long Beach, the key will be to implement a policy that achieves the goal of providing relief for local residents without driving away much-needed development.

During Saturday’s workshop, Diana Elrod of LeSar Development Consultants said the city’s study found that Long Beach is divided in two when it comes to development.

One area, a sliver from roughly Pacific Avenue to Atlantic Avenue that stretches from downtown north to the 405 Freeway, is where essentially all of Long Beach’s new development has happened in recent years.

“There’s been virtually no new residential development in” every other part of the city, she said, “throughout several real estate cycles.”

Because of that, Elrod said that Long Beach would most likely need to implement two different policies. A simple requirement to include affordable housing in new projects in the first area could likely yield the intended results, she said.

Everywhere else, though, Elrod said, would probably need some type of incentive for developers to even begin building in the first place.

Some incentives could include changing setback and minimum square footage requirements, increasing height limits and reducing parking ratios. Elrod said Long Beach could offer those things to builders who include a certain percentage of affordable units as a way to encourage spreading that housing out more throughout the city.

For Regina Taylor, another attendee of Saturday’s workshop, that type of distribution should be the centerpiece of any inclusionary housing policy.

Taylor has lived in Long Beach’s Wrigley neighborhood for 18 years. Bounded by the L.A. River to the west and the Metro Blue Line to the east, Taylor said her neighborhood already has more development than it can handle.

So, Long Beach’s task in this endeavor is to balance all of those concerns — along with the myriad others that come up along the way.

The city’s Housing Development Officer Patrick Ure said Saturday that his team is planning more meetings in the months ahead — some with housing advocates, some with developers.

“We want to get specific feedback from both of those groups,” Ure said.

After that, Ure said his team would come to the Planning Commission with a proposal, which would then go before the City Council for final approval, likely sometime in September.

“Hopefully it doesn’t drag on too much past that,” he said. “We would like to move this forward.”