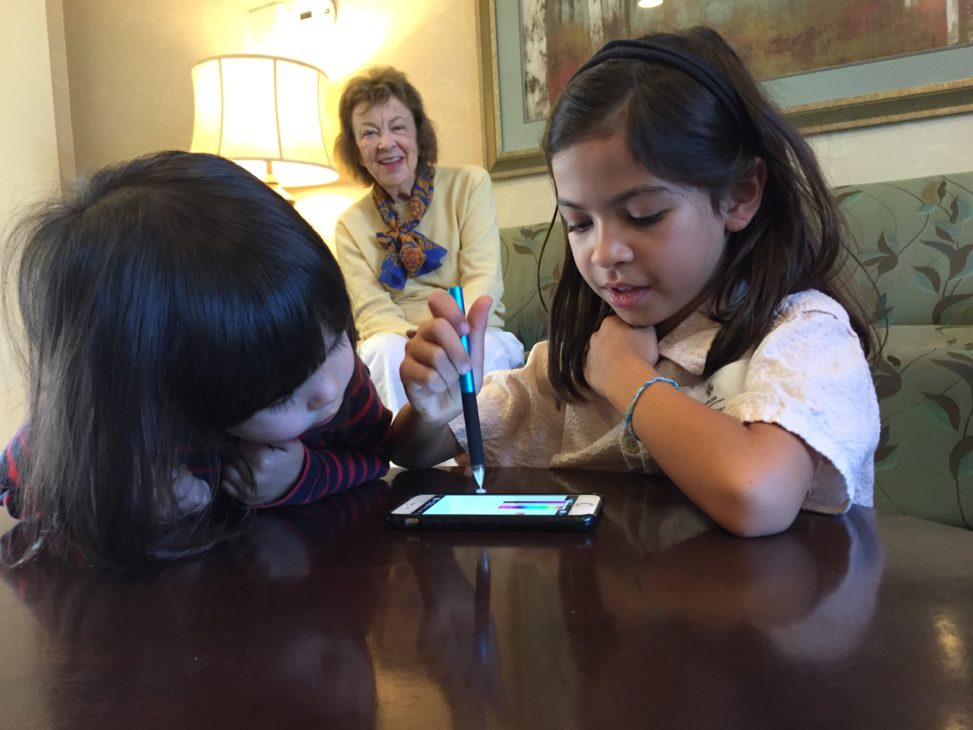 Sisters Juniper, 2, and Poppy, 8, play with one of their favorite smartphone applications, while their great-grandmother Harriet Koppel looks on. (Photo by Ashleigh Ruhl / Grunion Gazette)

Even though her daughter and grandchildren live hundreds of miles away in the Bay Area, 66-year-old Long Beach resident Melinda Wells can still feel close to them, thanks to today’s technology.

Several times a week, Wells is on FaceTime with daughter Julia Moran, 36, or Moran’s two children, ages 3 and 5, trading emails about recipes and making plans for Thanksgiving.

For everyone involved, technology brings them together.

“I don’t think my kids would have the same connection to their grandparents if they weren’t able to see them and talk to them and show them what they’re working on at school,” said Moran, 36. “It’s still not the same as being there and being close by but it does deepen the connection while living far away.”

For today’s families, technology is an extension of how they communicate, especially across generations.

According to a 2015 report from Ericsson ConsumerLab, which surveyed more than 1,005 parents and children in-person and online across the United States, having “continuous contact throughout the day with other family members increases the feeling of closeness and happiness,” adding that most claim they communicate more and know each other better with the help of technology.

“The great thing is that relationships and communication can now be in real time,” said Karen North, director of USC Annenberg’s Digital Social Media program and a clinical professor at the college’s School of Communication. “We live in a real-time world, and you don’t just see your grandparents when they come visit once a year or when you mail them a photo. Now not only can we send them photos and text messages or video, we can even live stream an activity and share in the experience … together.”

Representing just one portion of their large family, Gregory Koppel, Harriet Koppel, Poppy Wells, Melinda Wells, Juniper Wells and Lisa Koppel talk about how they use technology to keep multiple generators of the family connected in the digital-age. (Photo by Geronimo Quitoriano / Grunion Gazette)

Wells’ 64-year-old brother Gregory Koppel and his wife Lisa, are both deaf and depend on digital technology — especially the ability to text their friends and family — to communicate near and far.

The Long Beach couple said smartphones, in particular, have made a huge positive difference in their lives, especially in communicating with their children and grandchildren, and they’ve welcomed the digital-age with open arms.

One of his four children, 31-year-old Ashley Hopkins of Long Beach, said being able to send a quick text or hear her parents and see them use sign language in video conferences has kept the whole family better connected.

“Both of my parents lip read, and we all sign, so we use Facetime or Skype, and it’s so much easier to communicate, and faster and more personal than using the relay phone service,” she said. “With three of my siblings living outside of Long Beach, it’s become especially important.”

But although Hopkins and her father are able to communicate easier today thanks to technology, the digital-age’s opportunities aren’t easy for everyone to adjust to, especially for the eldest in the family.

In Long Beach, where 16 percent of households that lack internet access, a larger percentage of senior citizens are disconnected than younger generations. About 76.5 percent of seniors ages 65 and older are connected, compared to 87.8 percent of adults ages 18 to 64, according to a census survey.

The downside to all this technology, North said, is that “for those who don’t participate, they feel that much more isolated or shunned.” And it’s not always easy for seniors to embrace all these changes; they don’t want to bank online or look at pictures online. They’re still more comfortable receiving real mail.”

“It’s hard to pull us into this century,” Koppel said about herself and her same-age friends. “I wish I could turn on a magic switch to have that knowledge in my head, how to use these things.”

Koppel has resisted some modern-day advancements and relies on family members to help her with services that have gone paperless — from online banking to purchasing airline tickets to seeing digital photos of her grandchildren and great-grandchildren.

“I would just like them to print the photos off because I love to go through pictures, but they do bring their devices, fiddle around on there, and the pictures come up,” Koppel said. “So I see the photos, even if I don’t always have copies, and we do print some for my big bulletin board.” With multiple generations of their family on the same couch, Harriet Koppel, 89, Poppy Wells, 8, and Melinda Wells, 66, talk about the similarities and differences in how they use technology in their daily lives. (Photo by Geronimo Quitoriano / Grunion Gazette)

Although her great-grandchildren Poppy and Juniper Wells, ages 8 and 2 respectively, enjoy showing Koppel their artwork online, Koppel prefers to see the originals.

And to Koppel, phones are still meant for talking.

“I don’t like the texting,” she said. “It’s not fast enough, and everybody is looking down while they do it — those young people, they’re missing out on things and not learning how to communicate.”

She acknowledges, though, that not having access to the computer or internet does prevent her from being able to enjoy some of the things younger generations of her family are able to, from video chatting to GPS navigation to shopping online.

“It’s all going paperless — everyone wants you to go online,” she said. “Sometimes it’s hard to get a business’ phone number or leave them a voice message because they want you to email them.”

Koppel said she still enjoys receiving mail, knowing her favorite bank teller’s name and reading four printed newspapers every day. She’s determined to stay active socially, playing bridge and getting together with friends  — making those visits in person instead of video chatting.

Although Koppel emphasized that she gets by just fine in the digital-age, she does sometimes feel frustrated and left out, Wells said.

After the Emmy Awards, Wells said her mother was disappointed reading the newspaper’s list of winners. Koppel couldn’t watch some of the online-only streaming shows without having an internet connection.

“She said, “That is not fair, that’s not fair to older people, that’s just wrong,” Wells said. “And she’s right, it is unfair…

To some degree, it’s impossible to catch up, even for tech-savvy Wells, who said she has kept up better than most of her peers but still feels outpaced by her children and grandchildren.

A retired college professor, Well said has to keep adapting in a world where something as simple as signing up for a magazine subscription, making a dinner reservation or booking an airline ticket has to be done online.

Thankfully, the increasingly intuitive nature of smartphones is allowing more and more seniors entry into the digital age, if only in moderation, North said.

“We have technology now that’s easy to use, even [for] those who aren’t tech inclined, and it allows friends and relatives who live far away, are disabled or just suck at work to have a really rich personal experience with friends and relatives,” she said. “Our ability to be able to connect with each other has grown and grown.”