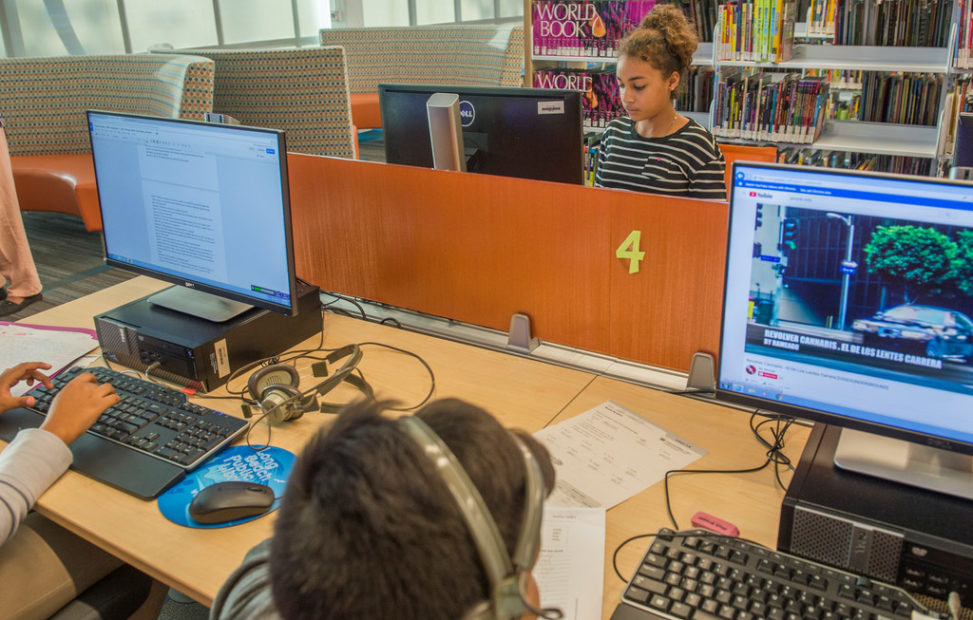 Analia Edwards does her homework at a computer station at the Michelle Obama Library in Long Beach Thursday, September 21, 2017. Analia does not have internet at her home so she comes to the library to access the internet.
(Photo by Thomas R. Cordova, Press-Telegram /SCNG)

The Harsh Realities of Living in Long Beach—Without the Internet

Long Beach is located in the heart of one of the world’s most technologically advanced regions.

Yet one in six people who live in California’s seventh largest city aren’t connected to the lifeblood of the 21st Century: the Internet.

That’s disturbing, experts say, in an era when Internet access is crucial for filling out job applications, applying for government benefits, enrolling in college classes and even doing grade-school homework.

What once was a luxury is a necessity. Some consider it a fundamental human right.

However, access is anything but a universal possession in the densely populated, ethnically diverse, 51-square-mile Los Angeles County city.

And that number doesn’t tell the whole story.

Another 9.5 percent of households have the ability to connect only because someone in the family possesses a smartphone. Some experts consider the smartphone a convenient, yet for the most part inadequate, means to perform vital Internet-related tasks.

From that perspective, one in four households lacks an adequate portal to the World Wide Web.

By any measure, though, Long Beach is a city of haves and have-nots when it comes to Internet access at home. And proportionately fewer households are connected in Long Beach than in neighboring cities such as Carson, Downey, Lakewood and Torrance.

Long Beach is roughly on par with Los Angeles County as a whole, but not with other large coastal counties. Significantly higher rates of connectivity prevail in Orange and San Diego counties. 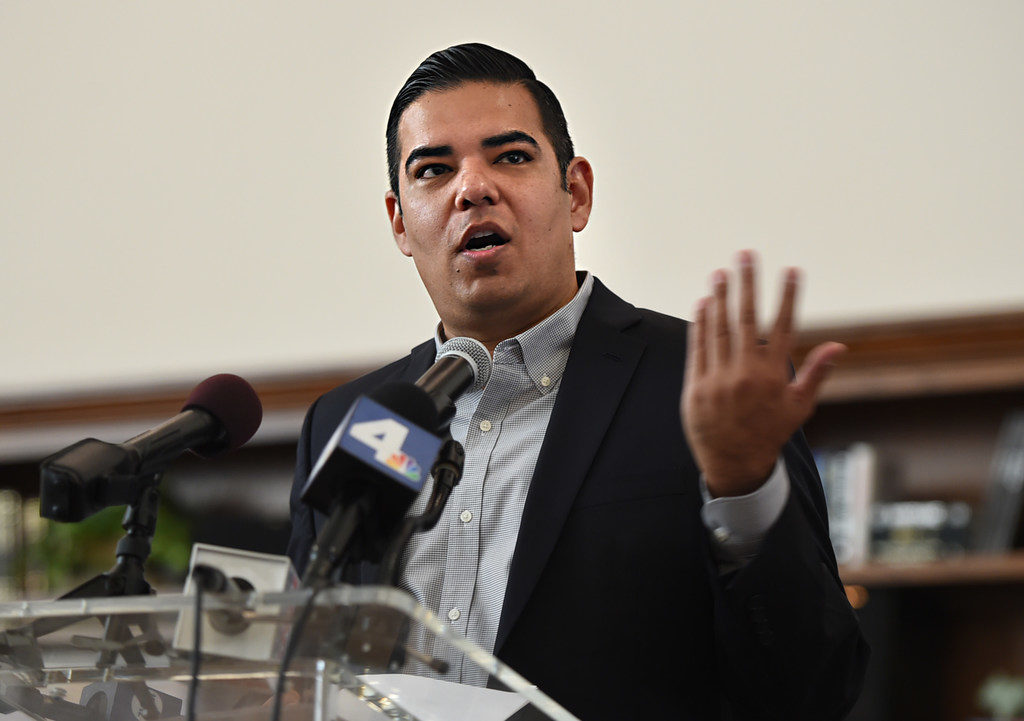 “The digital divide is real,” said Mayor Robert Garcia. “It exists in the country. And it certainly exists in Long Beach.”

Census numbers show the city scores a little higher than the national average, but lower than California overall.

That’s concerning given that the Golden State is the birthplace of the Internet and the Pacific Coast states are among the nation’s biggest adopters of the Internet.

“It’s embarrassing,” said Sunne Wright McPeak, chief executive officer and president of the California Emerging Technology Fund, a group that is leading the charge to close the digital divide. “We are the fountain of innovation.”

It’s also embarrassing because the city of nearly a half million people fancies itself an emerging capital of technological innovation, a sort of Silicon Valley South.

“We, in Long Beach, want to be on the cutting edge,” said Jessica Quintana, executive director for the advocacy group Centro C.H.A. “And we are a great city. But I think we need to dive in a little deeper and look at which populations are being disenfranchised.”

Diving into the new census survey, one finds that those who lack access are predominantly people of color, the poor, those who didn’t graduate from high school and change-leery senior citizens.

There is also a dramatic geographic divide between east and west, on a scale that mirrors rates of access in South Central Los Angeles versus West L.A.

While just 7 percent of whites living in Long Beach lack an Internet connection, the percentage rises to 12.4 percent for Asian-American residents, 16.9 percent for Latinos and 19.2 percent for blacks.

Quintana termed the figure for Latinos alarming given they constitute the largest ethnic group. According to the Census Bureau, Latinos make up 45 percent of Long Beach’s population.

There is a stark divide when it comes to income.

Close to half of households subsisting on $10,000 or less per year – 42.9 percent – don’t have Internet access of any kind at home.

Then there is the education factor.

Among those who didn’t graduate from high school, more than a quarter – 25.7 percent – aren’t connected at home. And, again, that is counting those who get online solely via a smartphone in the column of those who have access.

The no-access percentage falls to 14.8 percent for high school graduates plus those who took some college classes, and to 5.3 percent for people who earned a bachelor’s or more advanced degree.

Islands in an Internet sea

The large numbers of people living as islands in a sea of Internet activity, for the most part, isn’t a result of broadband service not being available in one’s neighborhood.

However, USC’s analysis, based on the 2015 American Community Survey, reveals differences by geography in who actually subscribes to Internet service.

The vast majority of households on Long Beach’s affluent east side have Internet beamed into their homes. But significantly lower broadband adoption rates prevail in northern and southwestern reaches of the city. Central Long Beach and Signal Hill fall in between.

Perhaps what is most striking is the sharp difference – more than 20 percentage points – between east and southwest Long Beach, said Hernan Galperin, a research associate professor in USC’s Annenberg School for Communication.

“East Long Beach has broadband adoption levels close to those of West L.A.,” Galperin wrote in an email.

“I don’t think it should be a huge surprise that there are areas of our community that are lacking access,” said Garcia, the mayor. “It’s clearly tied to income, and to who can and cannot afford broadband service.” 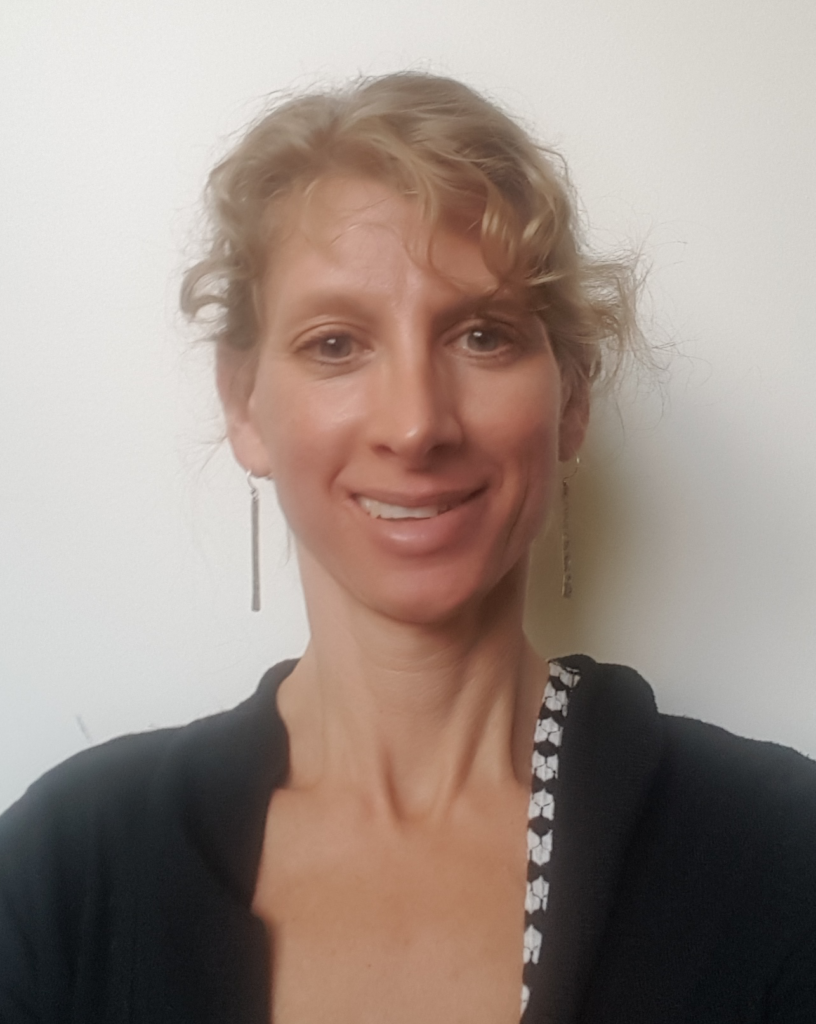 Indeed, for many the decision to not subscribe to a broadband service is a purely financial one, said journalism professor Gwen Shaffer, who teaches Internet policy and communication law at Cal State Long Beach.

If a family is given a choice between subscribing to broadband or putting food on the table and paying rent, Shaffer said, the Internet’s going to lose every time.

Still, lack of access is not only about cost. Some choose to live disconnected because the Internet is foreign to them.

“They don’t have the skills and are intimidated about the prospects of using a computer,” Shaffer said. “Sometimes they just don’t trust it.”

Indeed, said Bob Cabeza, vice president of community development for the YMCA of Greater Long Beach, the computer is second nature for younger people.  But older folks, not so much. 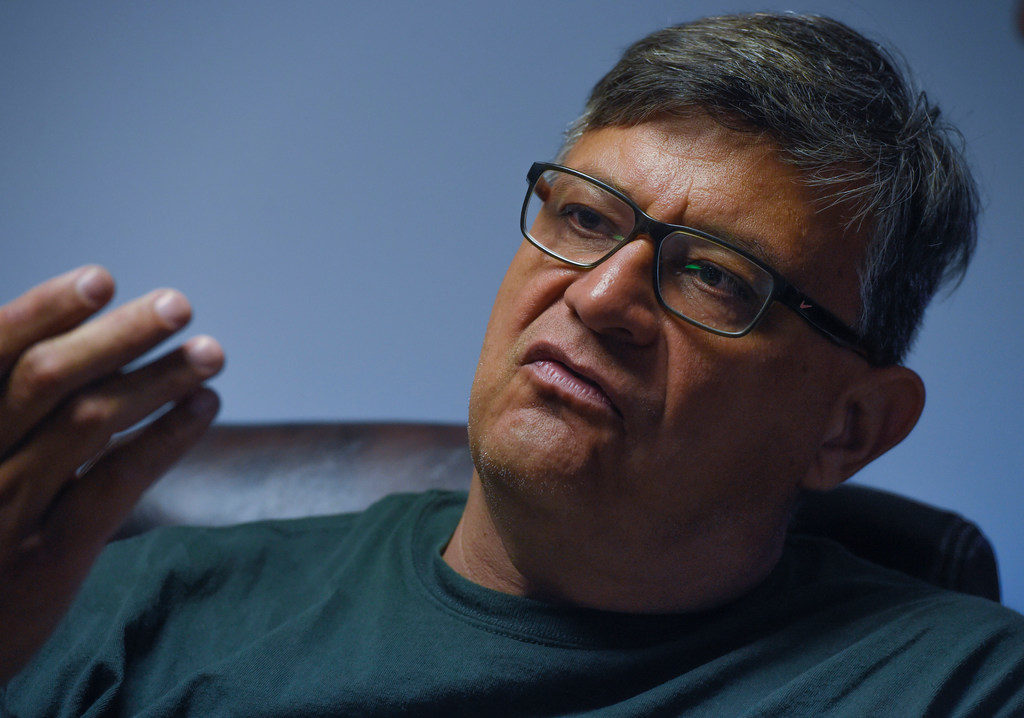 “Kids are swimming in technology like fish. They are digital fish,” Cabeza said.

But older adults, he said, must learn to swim because they are “digital mammals.” So it comes as no surprise that senior citizens are among the most disconnected Long Beach residents.

Many seniors have lived the better part of a lifetime using the old-fashioned wall telephone, a thing called the phone book and the printed newspaper. And they’re not in a hurry to transition to the digital world.

That sentiment is reflected in the census snapshot.

Twenty-four percent of people age 65 and older do not subscribe to broadband, and 17 percent don’t even own a computer — of any kind.

Still, medical information is increasingly being dispensed online. So is information about Social Security and banking, experts say. Not to mention that one has to go online to buy airline tickets to visit the grandchildren.

So access is becoming increasingly important for senior citizens all the time.

And for almost everybody else access is an absolute necessity.

Berenbroick, of the D.C., group, said most jobs are advertised over the Internet,  and job seekers are expected to apply online.

“Even the federal government doesn’t take paper applications anymore. It’s all online,” he said. “Many large employers are the same way.”

Yet, in another facet of the Long Beach digital divide, those who need the Internet most are the least likely to have it.

Almost 23 percent of unemployed residents lack access, compared to 11 percent of those who do have a job.

“We already have inequalities in our society, in terms of educational level and income,” Shaffer said. “The thing we need to consider is that, when you tack on lack of Internet access, you are compounding inequality.”

Cabeza added: “We’ve built a digital wall for people that they have to climb over to get out of poverty.”

Across much of Long Beach, families have the ability to connect to the Internet. However, because some cannot afford computers and broadband subscriptions, many remain disconnected from the World Wide Web.