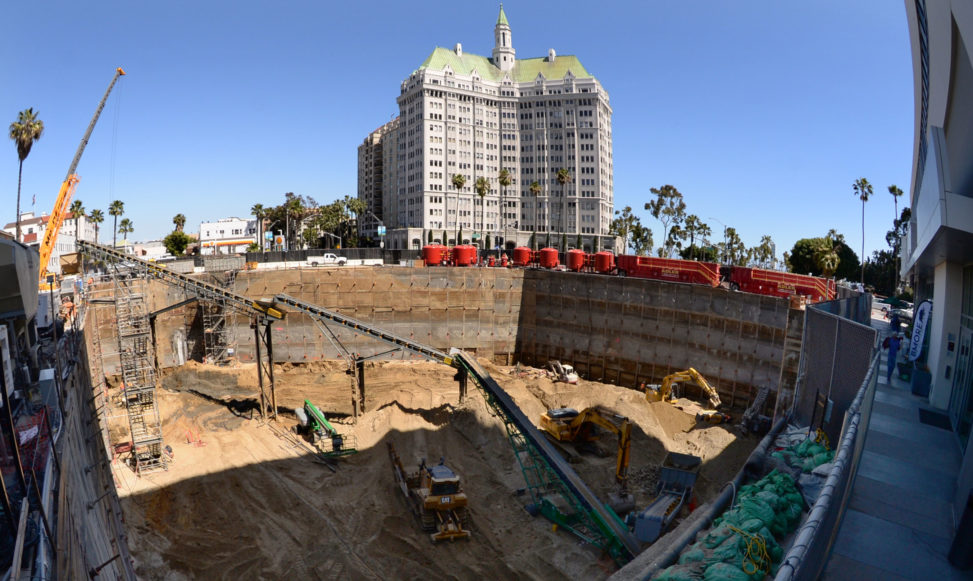 Construction on the Shoreline Gateway tower at the corner of Ocean Boulevard and Alamitos Avenue. The 35-story tower will hold 315 Òultra-luxuryÓ apartmentsÑa mix of studios, and one- and two-bedroom apartments ranging from 580 square feet to 2,480 square feet. The building will also feature a two-story penthouses on the 34th and 35th floors. Tuesday, May 21, 2019. Photo by Stephen Carr

What’s Going Up in Long Beach?

It’s been nearly seven years since the city passed a revision to the Downtown Plan, in which city leaders outlined the goal to bring 5,000 new units to the area. Since 2012, only 367 units have been completed, according to figures from the city’s planning bureau.

“That means they got approved, they got built and they’re now occupied by someone. So that’s a pretty small number,” Chris Koontz, Long Beach’s planning bureau manager said.

However, things are looking up. There are more than 1,700 units under construction in the area. “That means by this time around 2020, a lot more units will be available for rent or purchase. And then there’s over 1,000 units proposed that aren’t yet approved,” Koontz said. “They’re going through the approval and review process.” 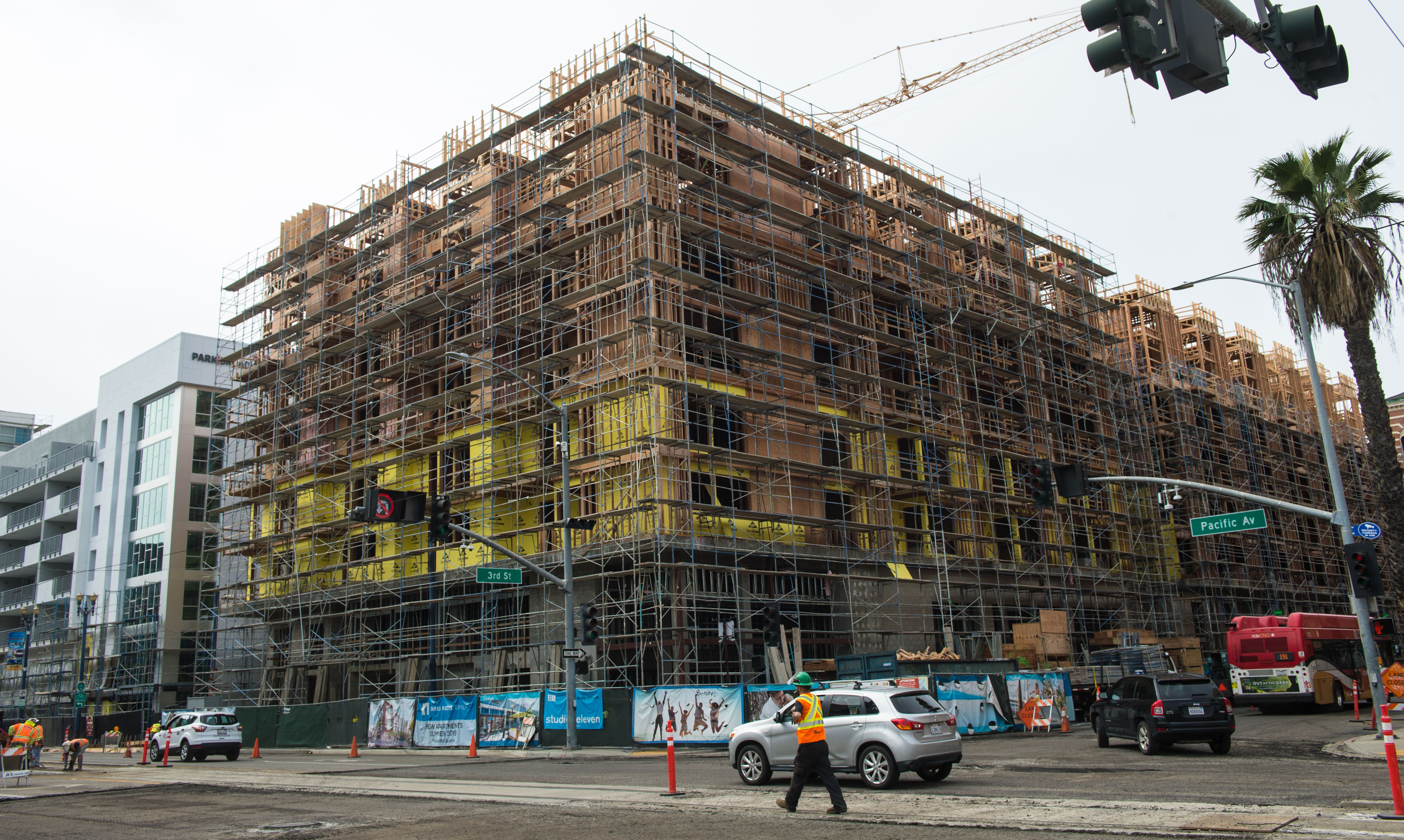 A Sare-Regis development, The Pacific at Pacific and 3rd Avenue, featuring 163 apartments with ground floor town homes, studios and 1-2 bedroom apartments. 10% of the units will be reserved for moderate income residents. Long Beach California, March 25, 2019.
Photo by Stephen Carr

Part of the problem is that Long Beach is built-out. Parcels where a developer can plunk down some cash for a vacant or scantly occupied, and unwanted, lot for a hundred-plus unit project are far and few in between.

“We’re not just talking about tear downs and reuse projects,” Koontz said. “So, in downtown a lot of the easy lots – sort of vacant properties, underutilized parking lots – those are either in development or we have applications in. And we are now to the harder sites.” Mostly what’s out there are 10,000-square-foot lots that may or may not be vacant, with little room on either side, he said as an example. 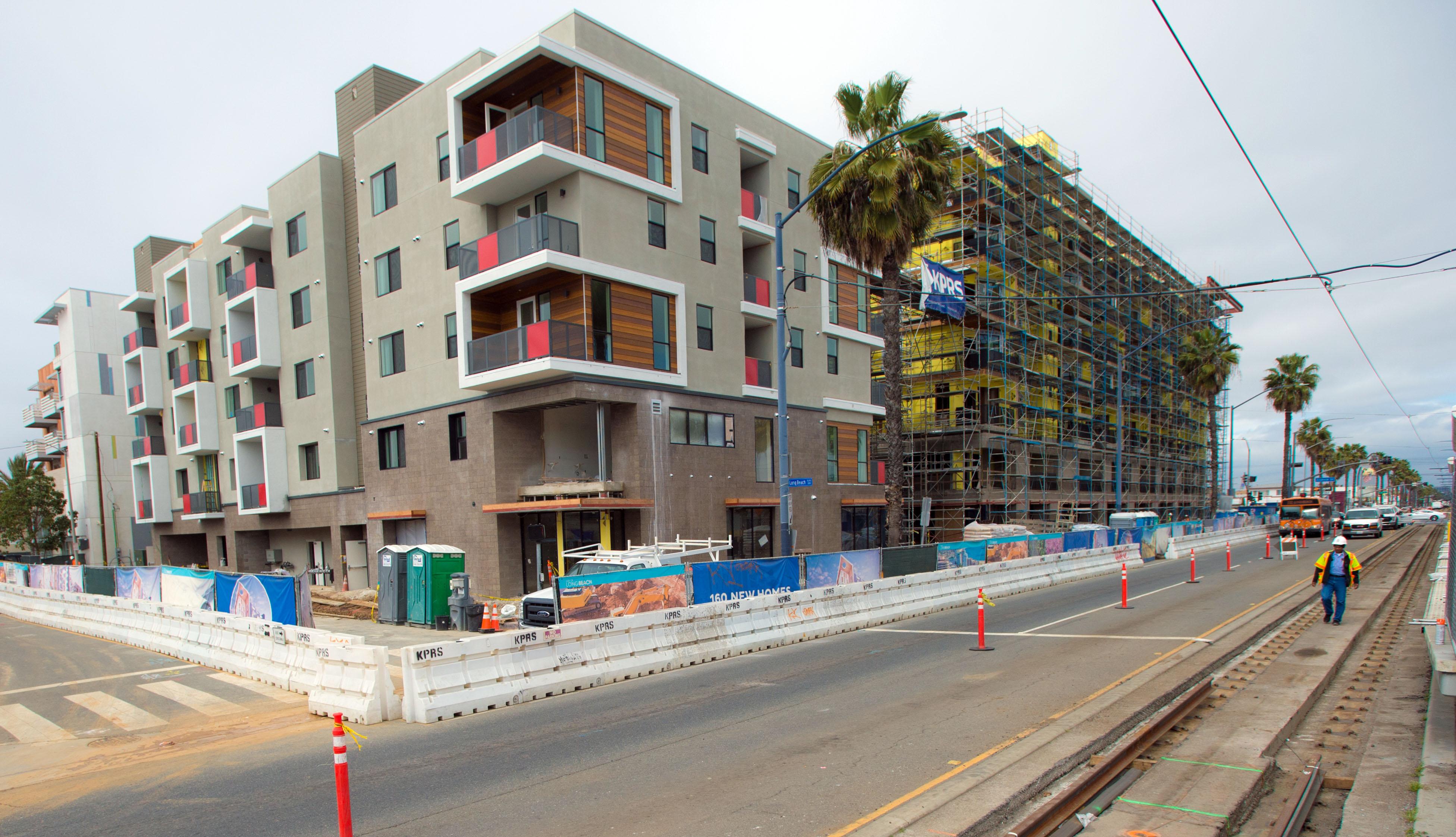 These small lots in heavily developed areas make it tough on developers, who must come up with a design that fits and one that’s profitable, according to Brian Ulaszewski, principal and executive director for City Fabrick, a nonprofit design studio.

“It’s already competitive for developers, and developers on these sites have to throw more money into making things pencil on some of these kooky sites,” Ulaszewski said.

Parking requirements, even in an area like downtown – which has reduced minimum parking requirements to enable more development – density and height restrictions as well as the overall regulatory process often push developers away and into easier projects with more open space. 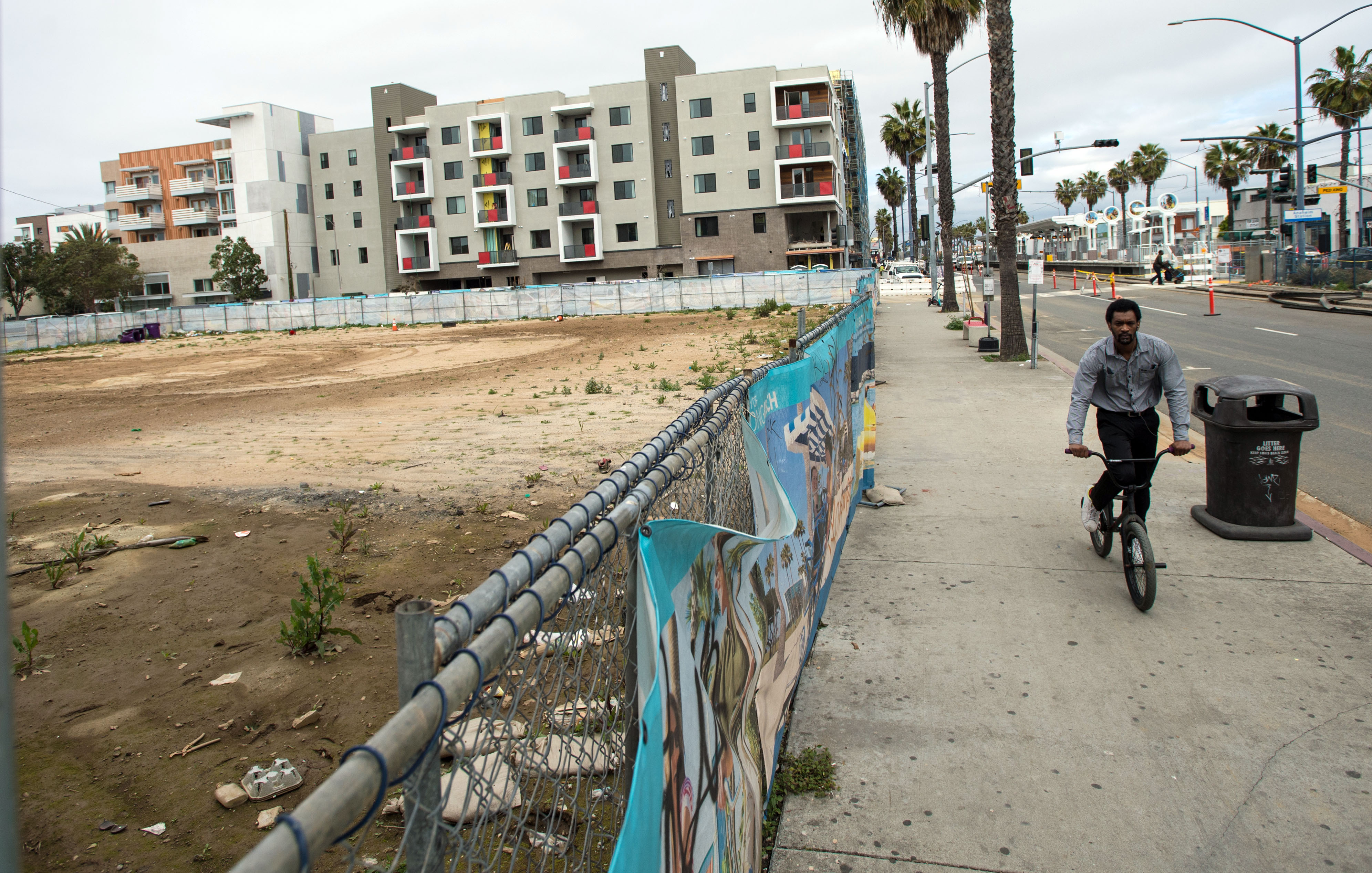 LB + 14th is a speculative project and has not been approved. Early plans called for a five story project with 65 units and 2,100 square feet of ground floor retail. Long Beach California, March 25, 2019.
Photo by Stephen Carr

Dave Powers is vice president of Irvine-based Sares-Regis Group, a privately held real estate development firm that has numerous apartment units going up in Long Beach. They include the Alamitos (136 units), and The Linden (49-units), which have started construction on the eastern edge of downtown in the East Village. A third community, The Pacific (163 units) is on the west side of downtown, and is part of the civic center master-plan redevelopment.

Despite the constraints, Powers complimented Long Beach as a welcoming place for developers looking to work with a local government that wants more housing and has worked to make things easier on people like him.

“It’s one of the easier cities to work with,” Powers said. One reason for this is the city has already commissioned an environmental impact report for the entire downtown area, enabling developers coming into downtown to forego the often costly and time-consuming EIR process.

Powers views downtown’s universal EIR as good way to bring in developers. “Environmental impact reports are going to take 18 to 24 months,” he said. Powers has never been involved with an EIR that took less than 14 months, he said, and added that the process can be costly. “You can easily spend $100,000 on an EIR,” he said.

Powers is in favor of creating regulations and incentives to help bring more housing units online. However, not all regulations that are being considered may do that, he warned.

The Long Beach City Council recently passed an ordinance that would financially assist tenants who received rent increases of at least 10% or were evicted without cause. The ordinance calls for two months of payment toward relocation costs based on number of bedrooms, up to $4,500. For a studio, a tenant displaced from his or her unit could receive $2,706 in relocation benefits. The ordinance will take effect on August 1.

Some in the real estate community have likened these policies to rent control, or believe that they could lead to such a policy. Powers believes rent control should be thought about carefully before the city proposes any such regulations. “If they do rent control on new product, it will kill development. People won’t build,” he said. “I think rent control is the wrong answer just about anywhere. It skews the market signals for new developments.”

While reaching for bigger solutions, Long Beach has plodded along with a bit-by-bit development approach, particularly in Downtown, which Koontz sees as  a small, yet important part of the housing solution, requiring patience – and likely other solutions. “You know, producing eight apartments doesn’t solve our housing crisis, but it contributes and it’s meaningful to the eight people that live there,” Koontz said.

The rest of the city also offers a little hope, with numerous projects both in and outside of downtown on the drawing board that promise to bring more dwellings to a city in desperate need of them.

“So, we’re in a more mature part of the development of downtown, but downtown is 2% of the city of Long Beach by land area. It’s not a sum of who we are or what we are as a city,” Koontz said.

The list of developments underway is expansive. Here are a few “project showcase” residential developments the Planning Bureau has highlighted:

Broadway Block (Construction is expected to start in early 2020 with completion in 2023.)

A proposed, 23-story mixed-use center was approved by the Planning Commission in March 2018. the 23-story tower and 7-story mid-rise building will include 400 residential units, and 32,807 square feet of commercial space along with four levels of parking. The development includes the adaptive reuse and preservation of the Acres of Books historic building, and an 18,016-square-foot ground-floor plaza that will provide mixed-use opportunities for restaurants, retail and a pedestrian connection across the entire site.

LB + 14th (This project is speculative, and not yet approved. The property is for-sale and the property owner’s intentions are unclear.)

The mixed-use project brings market-rate, for-sale multi-family housing to an area near the Blue Line’s Anaheim Station. The 5-story project will include 65 units and 2,100 square feet of ground floor retail space. Plans call for a mix of one-, two-, and three-bedroom floor plans ranging in size from 720 to 1,705 square feet.

Pacific Pine (Hannover Co. is in the process of construction. This project should be complete in 2022.)

Two 8-story buildings on two adjacent sites totaling nine parcels was approved by the Planning Commission in June 2018. The project will contain a total of 271 apartments, 1,305 square feet of retail/commercial space and parking for 341 vehicles. The apartments will include a mix of studios, one-, two- , and three-bedroom units, including eleven units reserved for moderate income families. This project is expected for completion by 2021.

10, 2-story townhomes, being built in partnership with the Habitat for Humanity of Greater Los Angeles. The project is funded in part by The Long Beach Community Investment Co.

An 8-story, 120-apartment home, mixed-use development going up near the Metro Blue Line was approved by the Planning Commission in September 2018.

A 7-story, multifamily residential building was approved by the Planning Commission in September 2018. The project includes 97 apartments, an outdoor plaza area and a one-level subterranean parking garage. It’s located near bus lines and the Metro Blue Line.

The 8-story Aster development will create new housing, retail, and restaurant opportunities on what is now a surface parking lot. The proposed project consists of 218 residential apartments, more than 22,000 square-feet of open space and 2-stories of underground parking. The project’s third level will feature residential homes.

Ocean View Tower (Construction has stopped by applicant, and it’s unclear when construction will resume and be complete.)

Construction is in progress on an 11-story project that will convert the vacated Verizon building into a development of 106 studio, one-, two-, and three-bedroom homes situated above 4,200 square feet of ground floor commercial space.

Dorado (Under construction, and expected to be for sale in late 2020)

Construction is ongoing on 40 single-family homes in a 5.76-acre gated community that offers a variety of 2-story floor plans with two-car garages.

Broadway and Magnolia (Anticipated completion in 2021.)

The 7-story, 142-unit residential project offers a choice of studio, one, two, and three-bedroom apartments with retail and restaurant opportunities on the ground floor.

This affordable housing project is a 5-story, 101-unit complex, with an additional 15 units to be reserved for individuals and families experiencing mental health disorders.

The 27,000-square-foot residential project, set to be complete in 2020, rise to 5 stories and add total of 47 affordable homes to the neighborhood.