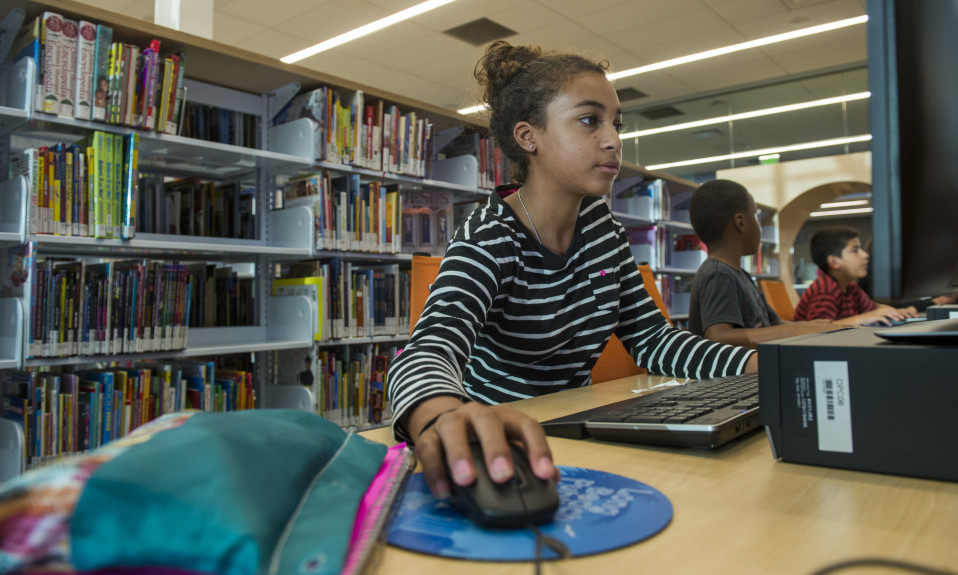 Analia Edwards does her homework at a computer station at the Michelle Obama Library in Long Beach Thursday, September 21, 2017. Analia does not have internet at her home so she comes to the library to access the internet. (Photo by Thomas R. Cordova, Press-Telegram /SCNG)

With no internet at home, some Long Beach kids must do their homework on the road

Used to be, homework was done – well – at home.

These days, some Long Beach kids do homework anyplace but home.

Cabrillo High School sophomore Angel Mijares, for example, heads to a friend’s house after school. That’s because the friend’s family has broadband; his doesn’t.

Other kids head to the nearest city library. “It’s not my cup of tea,” Angel said.

Geovanni Martinez, a Long Beach Poly High sophomore, drops by the Mark Twain Library. Usually on Tuesdays and Thursdays when it’s open till 7 p.m. Geovanni said he waits in line to get on a computer 15 minutes, sometimes longer.

“I usually stay after school so I can get the internet portion of my homework done,” she said.

Such stories hardly come as a surprise to Gladys Palpallatoc, associate vice president at California Emerging Technology Fund, a group with offices in Los Angeles and San Francisco that is pushing for more affordable broadband.

So students must get online or risk being left behind, she said.

In recent years, the 74,000-student district has purchased 11,000 iPads and 58,000 laptop-like Chromebooks for use in the classroom, Chandrasekhar said.

The district recently began rolling out digital textbooks, although students can still opt for traditional textbooks.

And Wi-Fi is piped into all instruction areas.

“In order to get them career ready, we have to make sure they have skills to access and navigate the internet because that’s a critical 21st-century skill,” Chandrasekhar said. “It’s imperative that we get them prepared for careers that we don’t even know will exist.”

#AskLBMC: What is important to know when purchasing a computer, especially on a budget?

Teachers use a web-based program to post scores and communicate with their students, Chandrasekhar said.

“Parents have access to it, so at any time they can check and see the child’s grades,” she added, noting that there are fewer surprises on report-card day than there were in the past. 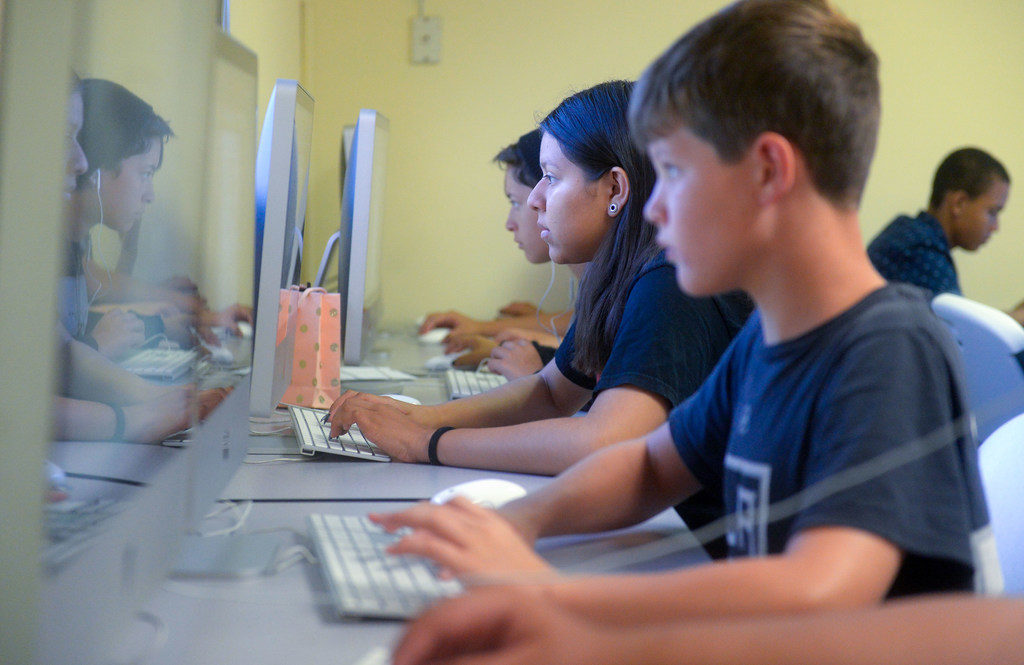 Students work on their projects at the YMCA Youth Institute in Long Beach on Friday, August 4, 2017. Many low-income children fall behind in school because they don’t have internet access access at home. Students take advantage of computers and internet access at the YMCA Youth Institute to learn computer skills. (Photo by Scott Varley, Press-Telegram/SCNG)

There’s a problem, however: Not every student, or parent for that matter, has internet access and can use that program.

LBUSD spokesman Chris Eftychiou said the district has a good idea how many students lack access. Educators, he said, recently surveyed students and found that 83 percent of pupils in grades 4 and 5, and 90 percent in grades 6 through 12, have the ability to connect to the internet at home.

About to give up

Some students have access at home only because they have, or someone in the family has, a smartphone. The Census Bureau considers a person with a phone and data plan to be someone who has an internet subscription.

In one sense, the smartphone has helped bridge the divide. It has put the web within reach of people who formerly could not get online.

Gwen Shaffer, a Cal State Long Beach journalism professor who specializes in broadband access, said the smartphone is far from ideal, however, for kids going to school. Doing homework on a tiny touchscreen, Shaffer said, is much harder than completing an assignment on a large-screen laptop or personal computer with a keyboard.

“There are plenty of Long Beach Unified students who attempt it because they have no choice,” she said. 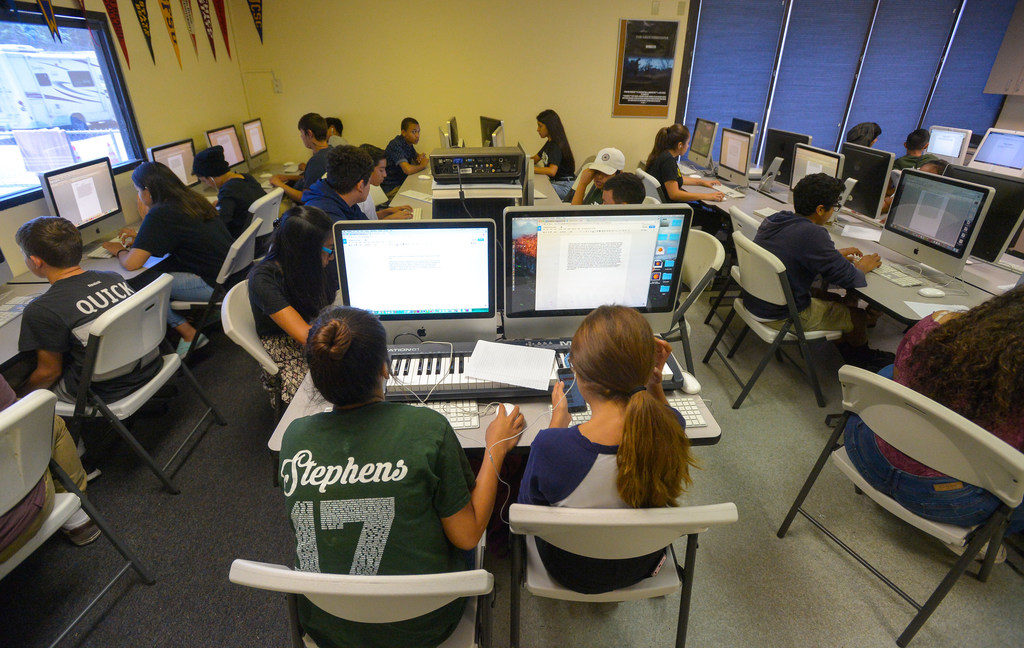 Students fill the computer lab to work on their projects at the YMCA Youth Institute in Long Beach on Friday, August 4, 2017. Many low-income children fall behind in school because they don’t have internet access access at home. Students take advantage of computers and internet access at the YMCA Youth Institute to learn computer skills. (Photo by Scott Varley, Press-Telegram/SCNG)

Angel, the Cabrillo High sophomore, is one who has.

Angel said he wrote a report last spring about the classic book “Lord of the Flies” on his smartphone.

“It was too difficult,” he said. “There was a point where I was about to give up.”

He didn’t. He persevered. But Angel vowed to never do another report on his phone.

“It’s not the most efficient way to do homework,” he said. “My phone is small. And it’s also cracked.”

“They try to provide time in class to do most of the digital work that needs to be done on the devices,” she said.

Chandrasekhar said some schools open libraries after hours so kids can do internet-based homework. They also coordinate with city libraries and community organizations such as the YMCA that provide banks of computers for the public.

And flexibility is built into the curriculum.

“The paper and pencil option is still there,” Chandrasekhar said. “If they can’t turn it in online, it’s not like the teachers hold it against them.”

Flexibility and options help. But it would be better, experts say, if kids could do homework at home. 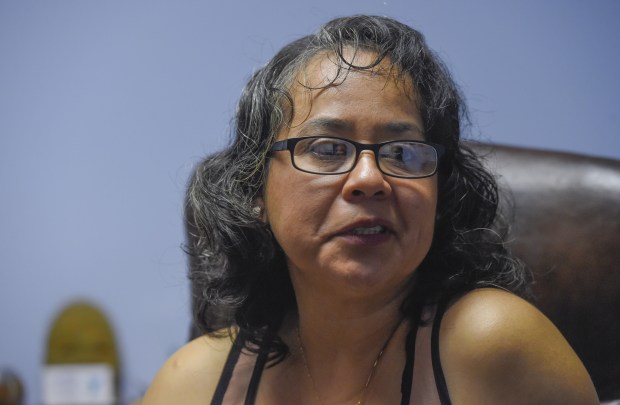 Maria Alvarado talks about how the internet has impacted her and her families lives in Long Beach on Friday, August 4, 2017. Alvarado got internet at her home about six years ago so her children would be able to keep up and do their homework. Many low-income children fall behind in school because they don’t have internet access access at home. Students take advantage of computers and internet access at the YMCA Youth Institute to learn computer skills. (Photo by Scott Varley, Press-Telegram/SCNG)

Maria Alvarado reached that conclusion a few years ago.

Alvarado, 45, said in Spanish through an interpreter that she had been dragging her feet about getting a computer and signing up for broadband.

“It was expensive,” she said.

Then Alvarado ordered broadband anyway when her children were in middle school.

“My kids convinced me that it was necessary,” she said.

“Everybody says, ‘Go to Starbucks,’” Oliviyah said. “But there is no Starbucks within walking distance of my house.”

“I think it would be easier to do (homework) in the comfort of your own home,” she said.

RELATED: How deeply the internet, smart devices are woven into everyday life for today’s kids just might surprise you (infographic)